Does your boat have a sound-producing device...? And can anyone hear it?

The title of this article sounds ridiculous doesn’t it? Even like a pun! But it’s a very valid question. Does your vessel have a sound-producing device?

Since most of the whistles and/or horns that are used in/on recreational boats are directional in nature, the Rules require these devices face forward on a boat, so the sound will carry and disperse in the general direction of the boat (most boats use astern propulsion very very sparingly).

Sound signals are broken into two types, long and short blasts. Short blast lasts for 1 to 3 second and a long blast from 4 to 6 seconds.

You will normally hear these sets of sound signals: 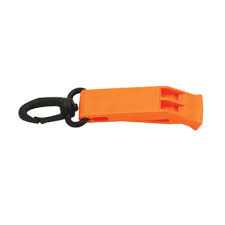 The Why’s and Wherefore’s

Why sound signals important? On your car, you have both a horn and turn signals. With these signals, which generally can be seen during most hours of the day and night, you provide in advance, to the other drivers, your intent to turn.

Your turn signals tell the other drivers one of three things; your turning right or left, or there is some sought of danger or hazard (when both sets of signals are on). On your vessel, navigation lights are in either the on position or off position. In addition, the ability to see navigation lights during the day is extremely limited. Thus, sound signals were devised to provide mariners with intent. This intent includes the ability to pass an individual vessel on either the port or starboard side.

Again, on your car you have a horn. Besides being used to vent your frustration with other drivers, the horn has some specific legal and safety uses. Included in these uses are to warn pedestrians and other vehicles to danger or dangerous situations. As well as to signify that your vehicle is exiting an area, where you the driver cannot see.

These uses exactly match the five short blasts, which is the danger signal, the three short blasts signifying astern propulsion and the one long blast signifying transiting an area where the master of the vessel is blind to possible approaching traffic.

Sound signals play an extremely important part in the safety of boaters. This is one of the reasons Vessel Examiners conducting a Coast Guard Auxiliary Vessel Safety Check will make sure your sound producing device works (as well as all your safety equipment).

To learn more about navigation, the rules of the road, or to request a Vessel Safety Checks you can contact the Coast Guard (http://www.uscg.mil/default.asp) or your local Coast Guard Auxiliary Flotilla (http://www.cgaux.org). A little more boating knowledge could just save the life of a loved one!

[Author’s Note: This article is part of a series of articles on safety and safety equipment required by Federal law.]